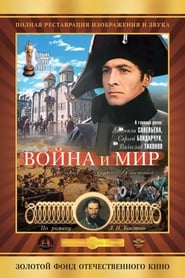 The first film of a four-part adaptation of Leo Tolstoy’s 1869 novel . In St. Petersburg of 1805, Pierre Bezukhov, the illegitimate son of a rich nobleman, is introduced to high society. His friend, Prince Andrei Bolkonsky, joins the Imperial Russian Army as aide-de-camp of General Mikhail Kutuzov in the War of the Third Coalition against Napoleon.